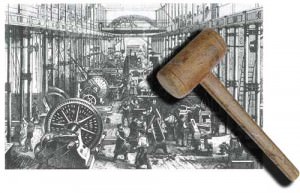 After reading the article “The Death of Expertise” by Tom Nichols as reminded of an old parable.

The Graybeard engineer retired and a few weeks later the Big Machine broke down, which was essential to the company’s revenue.  The Manager couldn’t get the machine to work again so the company called in Graybeard as an independent consultant.

Graybeard agrees. He walks into the factory, takes a look at the Big Machine, grabs a sledge hammer, and whacks the machine once whereupon the machine starts right up. Graybeard leaves and the company is making money again.

Knowing where to hit the machine with hammer: $4995